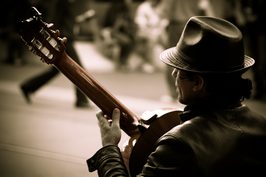 Competitions form a central activity in which ESPS members participate. The competitive process allows members to hone their photographic skills, learning from each other's efforts and from the comments of visiting judges. Even if a member never enters a competition, the various hallmarks of a winning photograph can be absorbed simply by seeing what others have done. Applying these principles to one's own work is a useful path towards taking better photographs.

Each month, members can submit examples of their work in a friendly but structured competition. In alternate months the topic is either "Open" in which images of any subject may be entered, or a set topic for all entries to broaden members' experience. Although the competitions are a fundamental core activity of ESPS, there are members who simply enjoy the spectacle rather than actively participating.

Members can submit small prints, large prints or digitally projected images, in colour or monochrome. In addition, two skill gradings ensure that the less experienced entrants are judged separately from those more experienced. This ensures that newer photographers are not forced to compete directly with the more competent.

Judging is conducted by independent judges, mainly from other clubs. Their comments and assessments help members to take better photographs, and also illustrate how different judges will bring different perspectives to what constitutes a "good" photograph. It is not so much a matter of the "best" photograph winning because the concept of "best" is ultimately a matter of personal preference. Rather, it is an indication of which photograph fulfils the requisite standard at a given point in time to a particular judge.

In addition to the monthly competitions, the "Berris Stokes Memorial Award" (Nature) Competition is conducted annually. The competition topic is "Nature" and the goal of the competition is to present an image which demonstrates the behaviour and/or characteristics of the subject beyond a museum catalogue record. Any manipulation or modification of the image during processing must not alter the content of the original scene.

In addition to the internal competitions, the Society also participates in competitions between ESPS and other photographic clubs. The ESPS Competition sub-committee chooses images for competition from entries submitted by ESPS members during the year. These entries are then entered on behalf of the club competing against photos taken by members of a number of other clubs. In most years, ESPS enters 4 different interclub competitions. Entries are judged on a similar basis to the internal competitions. The primary difference lies in the increased standard of entries and the nature of the competition which is "Open" rather than a "Set Subject".